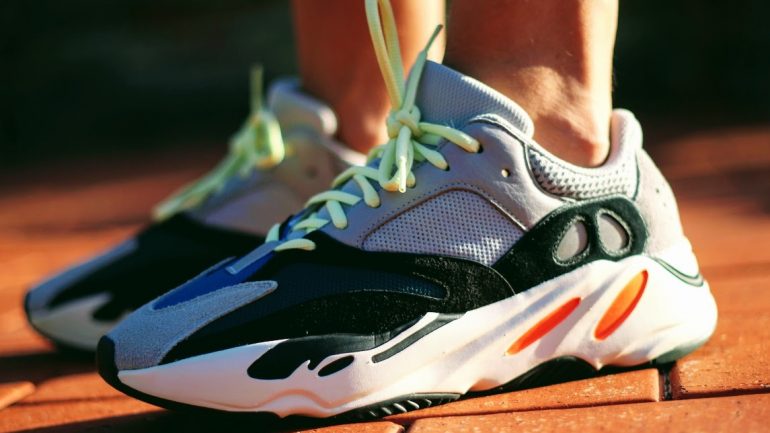 While a lot of bloggers will say they loved both the Yeezy Boost 700 and 350 immediately, there’s a large number, including me that didn’t like either on first release. When I saw the sneaker press images I thought it had to be a concept rather than an actual release but it wasn’t. I will again give credit to those who liked the look from the get go because for the last 3 months I’ve gradually built an obsession with the Yeezy Boost 700 ‘wave runner’.

In the sneaker game we get so use to the ‘norm’ and see iterations of the same thing which over time gets uninspiring. The Yeezy Wave Runner is apparently styled off some much older runners and I’ve seen a few images that confirm this. For Kanye to work on these was actually a master stroke, not only because of its originality but for its limited availability.

Unlike the now quite common Yeezy Boost 350 V2′s the only legit place to buy was on Yeezysupply and they sold out very quickly (as you’d expect). Adding to this, the runner was rumored only to be available in the US, with a later international release happening out of the blue. Resell prices sky rocketed in the months that followed averaging between £700-£1,000 for a legit pair (sorry those of you buying those at under that price).

During my recent holiday to Australia I found a store in Melbourne that resold new limited sneakers and you could look and try on (also you get to see if they’re real). I bought the pair at the lowest price I could find and wasn’t disappointed. I got advice on the sizing from one or two people I know have them and they both said buy actual size, which for Adidas is uk 9.5 – unfortunately the store only had a UK 10 but I tried them on and they were fine (I also get all my 350 v2s at UK 10).

The comfort of the Yeezy Wave Runner is very good but a more compact feel than any other Yeezy shoe. They come with the Boost technology still even though it’s somewhat hidden by the sole. The colours look awesome, a real iconic blend which I’m sure will be built on in the future. I’ve only really worn them with shorts and track pants so far and am very wary of the size with skinny jeans so I’ll likely go for a different style.

This sneaker is going to be as big as the 350 in terms of appeal and range, I’m sure of it. Hopefully they will be easier to buy in the future though. Hope you like the photos.

The next iconic design by Kanye after the 350 OG